3 Ways Your Good Taste Is Wrecking Your Creativity 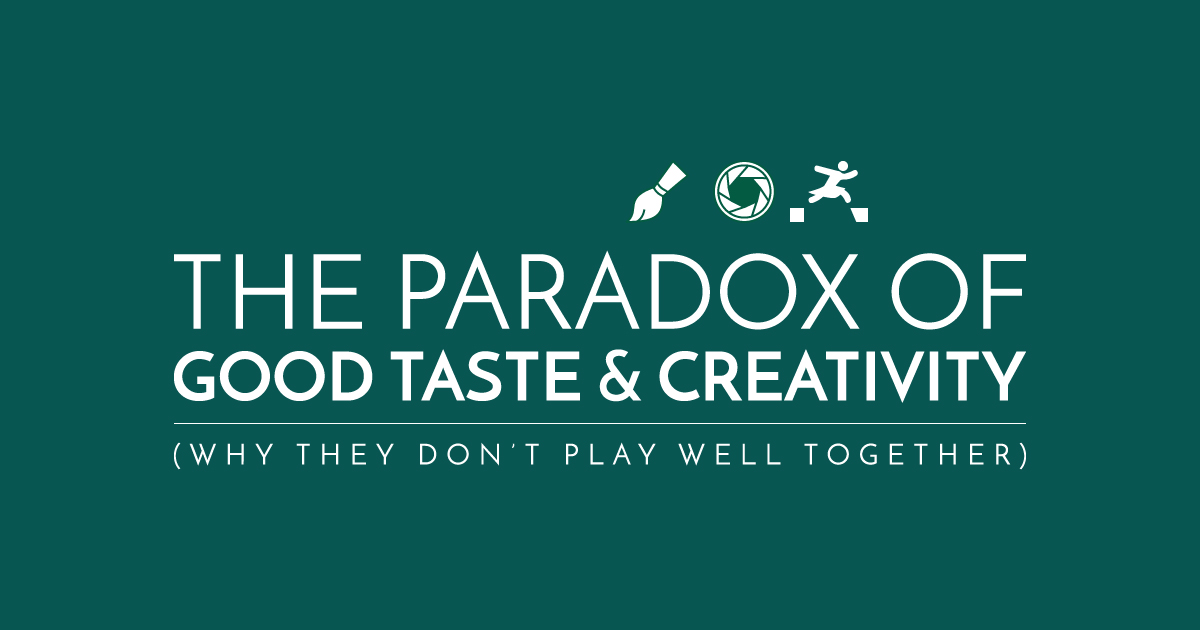 You may not realize this, but your good taste is wreaking havoc your creativity. And not in just one way, but three. At each step of the tripartite creative process—conception, experimentation, materialization—good taste lurks behind your creative efforts waiting to strike down your dreams.

Whether you’re an artist, a photographer, a designers, a programmer, a coach, an entrepreneur, a writer, or any other type of creative professional, you most likely got into your art, into the creative aspect of your field of expertise, because of your good taste. And therein lies the paradox of good taste and creativity:

Like a capricious mistress, the same good taste that turned you on to your creative endeavor is preventing you from reaching the climax of your full creative potential by messing with your head. Unless, that is… you know how to tame it.

Taste is the enemy of creativity.

The quote is credited to Pablo Picasso, and although its exact origins remain unverified, the attribution seems entirely plausible. Because the man who was crazy enough to abandon a highly praised style of painting for some misshapen child-like forms? Probably knew a thing or two about the war taste wages on creativity. Today, we marvel at Picasso’s paintings thoughtfully exclaiming “Ah, cubism!” while silently gaging at the prohibitive price tag. But when Picasso veered away from classical portraiture to create his cubist style, the entire art scene of Paris found his new style distasteful, shocking, and even offensive! The painter, they concluded, had simply abandoned his good taste.

The thing is, good taste is traditionally considered a positive attribute. An advantage to have over others, and a benefit to enjoy. Teachers, mentors, friends, parents — they all praise our “good taste,” and encourage us to keep following it. But good taste, if you think about it, is nothing more than glorified imitation. Having good taste simply means you enjoying a popular style and pinning it as a model for our creations.

And if good taste leaves you entirely content, it can stifle your creativity. Because contentment takes away the reason for trying something new, for looking for different solutions and modes of expression. It’s all been done before, good taste whispers in your ear mendaciously, and it’s been done well enough. Just follow the accepted taste.

So the first step to allowing your creativity flourish, is to recognize good taste for the impediment it can really be. You must realize that following the guidelines of good taste doesn’t make your creative (only imitative), though it may make you momentarily popular.

2. Good Taste Clipping the Wings of Creativity Through Fear

A lot of people have taste, but very few have the daring to be creative.

That’s what legendary New York Times photographer Bill Cunningham professes in the documentary that follows his work on the streets of New York City. And he couldn’t be more right, not only for those interested in the realm of fashion, but for anyone experimenting in any field, including your own.

In photographing the street fashion of NYC, Cunningham was particularly drawn to the adaptation of runway pieces to everyday life. But he noted that a lot of the high fashion was worn in mere good taste. Men and women carefully choosing “sensible” items from the season’s runway styles and simply incorporating them into their wardrobe. It shows good taste. But it bears no originality and hence no creativity.

The problem with good taste is that it makes us feel good in the knowledge that we’ve recreating something that has already been approved by public opinion. But “recreating” is not “creating.” Recreating is easy and safe. Creating taking guts because we might not always get it right. And repeatedly giving in to good style can eventually lead to a conformity with a certain degree of mediocrity in our work in our attempt to avoid failure.

But you’re doing yourself no favors by blindly following the Gucci and the Armani and the Chanel of your industry — the big names, in other words, that set the rules and dictate the trends for everyone in your line of business. Because imitation of good taste achieves nothing. You’re just a quick snap of Cunningham’s camera as he passes you on the street; a notable unknown in NYC whose photo may even be left on the cutting-room floor and never make the pages of the Times.

If what you’re striving for is creativity and originality, then you’ve got to kick good taste’s butt out the picture. You have to question it, change it, blend it, bend it (over backwards sometimes), and then dare to put it out to the world at the risk of having your work criticized, or even (shock! horror!) rejected.

Creativity takes bravery, and “few have the daring to be creative,” as Cunningham said. In order to win at the next stage of the creative process, that of experimentation, you have to find the courage to allow yourself to create freely and without restrictions. You have to banish good taste from its perch over your shoulder and refuse to let it judge your every attempt at the creative.

You probably recognize the quote from Ira Glass’ now-famous interview on the art of storytelling. Ira Glass identifies the disconnect between good taste and creativity in the final stage of the creative process, that of materialization. After you take courage and begin experimenting with creativity, you still have to deal with the disparity between what you create and what you know to be good taste.

You now have to face the Taste Gap. Because your taste is still good, impeccable in fact. But the results of your creative efforts don’t live up to your standards. And so you want to quit, convinced by your own good taste that you’re not that good of a creator after all. That you’re better of as a good-taste imitator.

So how are you to close the Taste Gap and succeed creatively? Ira Glass has the answer, but you may not like it:

Translation? You have to be patient with your sucky self and put up with your less-than-perfect creations until your skills catch up to your good taste. Do.The.Work.

Because creativity does not mean rehashing what’s already pleasing. Creativity means breaking the usual rules and giving the world something it has never seen before—at least not from your viewpoint and not in your light.

When you offer your clients your work in good taste, they simply smile in acknowledgement. They like your taste, and that’s nice. But they’ve seen it all before. From the guy just down the street, and the one up the street, too, and the woman in the next street over. It’s nice. But it’s nothing to go crazy over.

When you insist on your creativity, however, and when you believe in it, using your good taste as fuel for improvement, rather than an instrument of self-rebuke, then and only then you will truly succeed. Then people will start to really notice your work, to consume it, use it, share it, post it, and tell you how it has changed their lives. Because it’s extraordinary work, creative work. And they’ve never seen anything like it, or heard anything like it, or felt anything like it. Nobody else has understood them so completely, and nothing else has touched their hearts so deeply and so truthfully.

And that’s when you truly make a difference in the world: when you touch people. Because your daring can become their daring. You passion awakens their passion, and stirs their own creative intentions that are hibernating deep beneath a heavy cover of conformity slathered with good taste.

Because if not you, then who?

What will you dare to create today?