How to Boost Your Creativity in the Most Unconventional Way Ever! 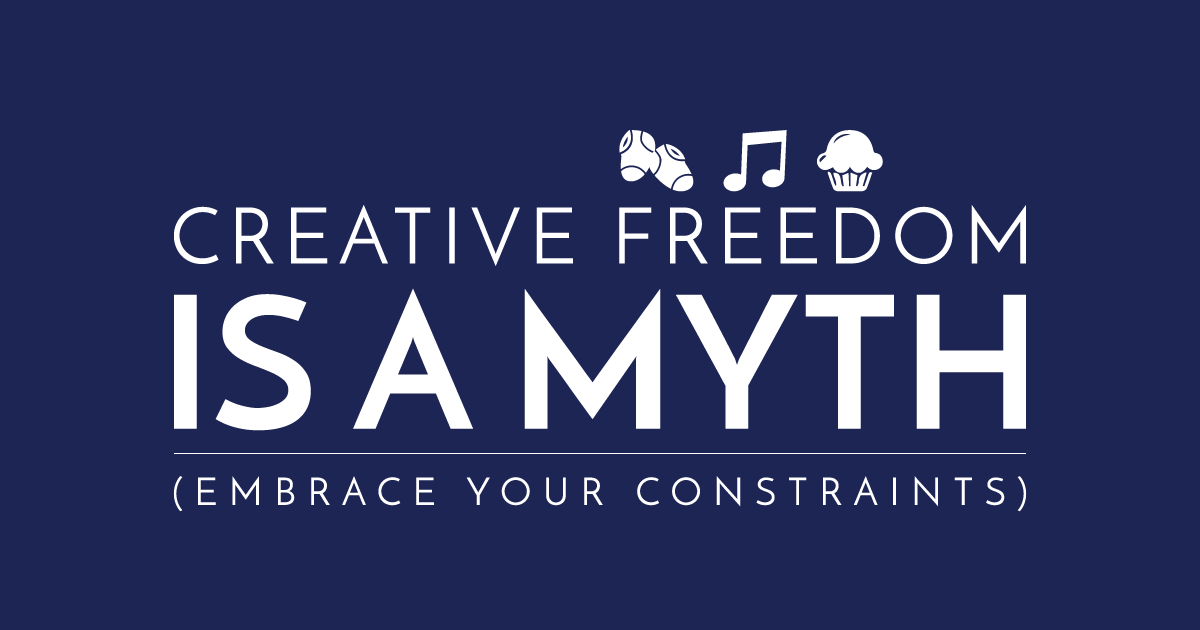 Even found yourself working on a project and lamenting the constraints imposed on your creativity by others? Oy vey! Oy vey!

Maybe it was the time constraint of a strict deadline (no time, oy vey!), or your own budget constraints (got a small pocket, oy vey!), or the constraints set by the specific tastes of your project manager or client requesting the job (they only like pink, OY VEY, indeed!).

Whatever the external constraint was, if you saw it as a limitation, you’ve been looking at creativity from the wrong perspective.

Contrary to what most of us believe, constraints are essential for increasing our creative thinking. No, you haven’t read wrong. Let us say it once more: (*standing on soap box, arranging hair*)

Constraints are essential for increasing your creativity.

Sounds unorthodox, right? Isn’t creative freedom the holy grail that all of us creative people have been taught to chase after? Probably. But the reality of the matter is quite different.

Creative freedom is NOT all it’s cracked up to be

Researchers at NYU and the University of British Columbia found that people “wrongly assume that they are more creative when they have an extensive rather than a moderate level of input choices to work that.” Through controlled experiments with knitters and crafters, the researches proved that “increasing input choice from a moderate to an extensive choice set has a deleterious effect on […] actual creativity.”

In other words? Unlimited choices and “creative freedom” kill creativity; they don’t increase it.

The two of us have certainly been guilty of making this wrong assumption back when we used to dream about finding those unicorn-dust clients that would shower us with large paper bills to create whatever we wanted without bringing any of their own limiting constraints to the project to shackle down our creative imagination: no tight deadlines, no unreasonable favorite colors, no ridiculous word-counts, no weirdo tastes. Just unicorns and rainbows…

And we found those clients! Much to our horror…

You know what happened? We hated those projects:

>> No deadlines mean the project drags on forever with nothing to define the pace.
>> No articulation of specific tastes and desires means dead-end conversations about pointless decisions.
>> No word-counts or target goals means absolutely no direction in the project.

And our supposed “dream” projects? They left us feeling stranded in the middle of the ocean grasping at straws. (Yeah, wrap your head around THAT mixed metaphor!)

When a client nonchalantly flicks his wrists and says “just create something”? RUN the other way!

Constraint is the mother of creativity

A research conducted by the University of Amsterdam proved through 6 distinct studies that imposed constraints and limitations help us not only become creative in finding solutions to a particular problem, but also open up our minds to the “bigger picture” and encourage our brains to think creatively even when solving non-limited tasks afterwards.

Meaning: Once limitations set off your creativity, it lasts for a few hours. Just like a good shower…

One of the things we’ve come to realize over the years is that we’ve created some of our best and most creative work for and with clients who knew precisely what they wanted and had goals that acted as constraints and direction to the project.

Constraints are a blessing to creativity, not a limitation.

And the best creative minds through the ages have been privy to this secret for a long time.

And the precepts of creativity don’t just hold true for artists, but for anyone doing creative work in any field. Some of the most famous and beloved business people and entrepreneurs, in face, built their brands by turning constraints to opportunities for creativity.

So, the more constraints the better?

Constraints are great for developing your creativity and the overall creativity of your team, because they force well-trained minds to find new and innovative solutions that they wouldn’t arrive at without external limitations.

But does that mean that more constraints we have the more creative we will become? Should you go straight to client or team leader and ask for less creative freedom please? Not quite….

Marissa Ann Mayer, the CEO of Yahoo Inc., and former vice-president of search products and user experience at Google, knows that “creativity thrives upon constraints.” And while she makes sure that all projects of her team are defined by clear challenges that must be overcome, she also knows that too many constraints can be the death creativity:

Constraints alone can stifle and kill creativity. While we need them to spur passion and insight, we also need a sense of hopefulness to keep engaged and unwavering in our search for the right idea. Innovation is born from the interaction between constraint and vision.

How to use constraints to fuel your creativity

Now you know: Constraints don’t have to be limiting. Viewed with a positive set of spectacles, the right amount of constraints can become the parameters of your most creative work yet.

How can you turn the constraints from your team leader or client into opportunities for creativity? Here’s a few tips:

It’s a small verbal shift, but it will change the entire way you view your project and turn constraints into fun creative opportunities.

2. View limitations as challenges to shine

Changing the way you talk about constraints is the first step. The second step is actually changing your attitude towards them. Instead of seeing specific requests as “limitations” to your creativity, start thinking of them as fun challenges.

Can you be creative with just sticks and rocks? Can you get great results with just three colors? Can you write an awesome report without using any jargon? If you view yourself as one of the best and most creative, and if you want to prove yourself as such, such “limiting” circumstances are your true opportunity to shine where the mediocre simply can’t.

All revolutionary work requires that the creator finds new ways of doing usual tasks. By definition. So instead of despairing that a particular project can’t be done that way, start thinking about how you can make it happen in a new way.

When accepted as creative challenges, constraints will push you to get out of your comfort zone and out of the “business as usual” way of doing things. And that’s where creative work happens.

What Constraints Fuel Your Creativity?

How do you deal with creative constraints?
Are there any constraints that have helped you become more creative in your work and overcome challenges?