What Does it Take to be Creative? 7 Tips from David Ogilvy 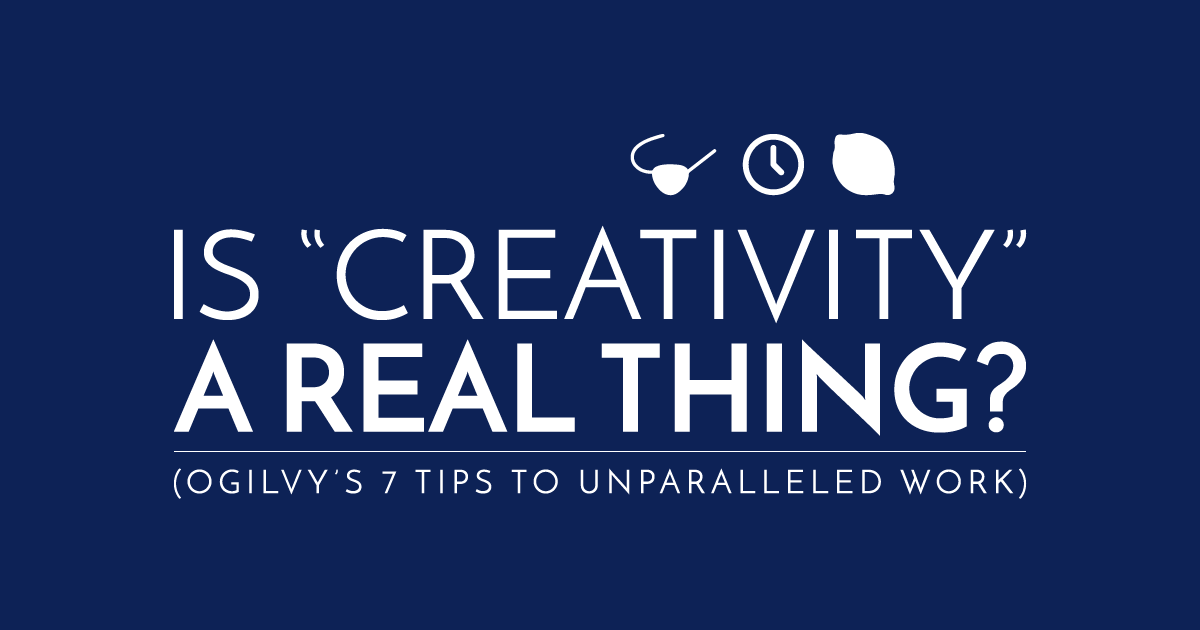 filed under: Creative Inspiration
David Ogilvy is often dubbed as the father of modern advertising. One of the pioneers of advertising campaigns and even content marketing (that used to be done in magazines long before the wild wild web and blogging ever sprung up on our ubiquitous screens), Ogilvy was not only a great agency man, but also a creative par excellence.

Some of his legendary work, such as the ad of the Man in the Hathaway Shirt, his Rolls Royce ad, and his VolksWagen beetle campaign, still stand at the paramount of creative advertising, and are held up as the standard of measure for many creatives in the marketing world.

Although in his books, Ogilvy refers to himself primarily as a copywriter, he in fact had a much more holistic approach to his work akin to a that of the creative director who’s responsible for both the verbal and visual components of a campaign. He was, after all, the one who donned the infamous Hathaway Man in his pirate eyepatch because he wanted to add a visual element of “story appeal” to his advertisement.

As both a creative and a marketer, then, David Ogilvy has some precious advice to dispense to all of us creatives, not only about doing our best work, but also about bringing that work to the (online) market. Buckle up, cause it’s going to be a wild ride!

Creative work is nothing if it isn’t approaching new ideas, angles, and perspectives that can give new life and meaning to the ordinary and trite. But how do we go about thinking these ideas?

With the dictates of fads and fashions all around us, opinionated clients who want (or think they want) what they’ve seen elsewhere, and the pressure of creating something that’s not only artistically sound but also commercially successful, we often end up chucking our best thinking out the window. We get “serious” and we “get to work” looking to create something buttoned up at a desk like an accountant or an administrative assistant who just has to follow some standard procedure.

In short, we fall into expectations. But that’s death to creativity. Because expectations simply dictate what worked before, not what will work now.

The cure? Monkeying around!
Well, sort of…

“The best ideas come as jokes. Make your thinking as funny as possible.”

Creating something, generating a new idea, imagining a new design, visualizing a new shoot, dreaming up a new recipe, these are pretty wild acts. You’re essentially creating something out of nothing. You’re innovating and pushing boundaries. Of course it will seem funny at first. Just go with it and laugh at yourself. Give yourself freedom and license to be silly and play.

2. On Waiting for Creativity to Strike

This is a favorite one. “I can’t do that now,” we often say excusing ourselves for not creating, “I’m just not inspired.” But is that really a valid and good argument to be making?

“‘Creativity’ strikes me as a high-falutin word for the work I have to do between now and Tuesday.”

Inspiration and creativity are no doubt an integral part of our work, but the truth is, we often don’t feel “creative” because we haven’t gotten into the groove of creating yet. Ideas, especially creative ideas, don’t materialize out of thin air, but out of other thoughts and ideas and stimuli in our brain that suddenly come together in new and fascinating ways.

You need to start creating in order to get creative.

There’s a common misconception among non-creatives that creatives work by pulling ideas out of a magic hat (or some inappropriate part of their body–but let’s keep this magical rather than nasty). But you and I both well know that creative work requires research. A lot of research.

Whether it’s visual research of shapes, colors, and styles before you start putting a new design together, or textual research, either by reading up on a specific topic or simply reading good advertisements or literature to expand your horizons, or even experimental research when you try to see how new ingredients or patterns or cuts or what-have-you fit together, the bottom line is: all good creative work requires research.

But it also requires judgment. And this judgement is often what we call “talent,” “an eye” for something, or “good taste.” It’s that something that makes creatives stand out in a specific ability over the general population.

What’s the relationship between research and judgement? Can creative work exist entirely based on the one while ignoring the other? Not really. Not if you aspire to do truly innovative work.

In the following quote Ogilvy comment on the erroneous way that many marketing departments approach research and judgement, but he could as well be talking about any creative department, or even a creative individual.

“I notice increasing reluctance on the part of marketing executives to use judgment; they are coming to rely too much on research, and they use it as a drunkard uses a lamp post for support, rather than for illumination.”

Research is great, and research is necessary to get a good notion of where we’re coming from and where we might want to go. But research alone will never give you all the answers. The moment will come when you’ll have to let go of that lamp post and simply jump off into the night trusting in the decisions of your own judgement.

William Maynard of the Bates agency said that “most good copywriters fall into two categories. Poets. And killers. Poets see an ad as an end. Killers as a means to an end.”

The categorization could be expanded to all creative professions. Graphic designers, photographers, web designers, animators, marketers even, or coaches, and generally anyone who takes a creative approach to the work he or she does. In any given field, some will see themselves more like poets, favoring the artistic execution of their work than any commercial functionality it may have. And some will see themselves as straight-shooting killers, going in for hitting those targets without worrying about anything overly artistic.

“If you are both a killer and a poet, you get rich.”

It’s not a matter of choices. Art and functionality go hand in hand in great creative work. Or, as we like to say, at Chocolate & Caviar:

The (truly) beautiful and the (successfully) functional are one and the same.

5. How to Steal Your Ideas

“Good artists imitate, great artists steal.” You’ve heard that one before, right? No, no. It wasn’t David Ogilvy who said it. Pablo Picasso? T.S. Elliot? Igor Stravinsky? Truth to be told, no one really knows where the quote originated. But its many iterations and repetitions don’t make it any less true; they only make the truth contained within it all the more telling.

What this quote gets at is the fact that the subject and “stuff” of art often come from life around us, if we only know how to look for them. A creative doesn’t have to create everything from scratch, but she has to know how to “steal” the material around her to create art.

Ogilvy’s own example comes from one his most famous headlines, and one the most successful headlines to ever have been printed in the advertising world. His iconic Rolls Royce ad states:

At 60 miles an hour the loudest noise in this new Rolls Royce comes from the electric clock.

Whoah! Great line, no? Who wouldn’t want that car?
Ogilvy didn’t write it. Nope. He didn’t. He just plain stole it. Where from? When he first went to Rolls Royce trying to come up with a Big Idea for selling their new can, he spent a whopping 3 weeks simply reading about the car (see: research!) and stumbled upon this sentence that someone in the company had noted.

Bam! Wham! Advertising headline! Which Ogilvy followed with all the technical words and copy to close the sale.

Ogilvy’s advice to all of us? Do your homework! The best material often lies in plain sight. But you have to know how to recognize it and steal it.

6. Pour Your Heart Into It

So… if you do your homework, do some research, use your judgement, and steal every now and again, you should be good to go, right? You can dub yourself a True Creative of your field and roll out the work like Mrs. Fields rolls out cookies!

Not quite. There’s another component necessary for producing great work that really engages your audience.

Since Ogilvy was an advertising and copywriting man, he speaks specifically about copy in this advice:

“Good copy can’t be written with tongue in cheek, written just for a living. You’ve got to believe in the product.”

But you can apply it to any profession and it still true:

Creative work can’t be done tongue in cheek, produced just for a living. You’ve got to believe in the work you do.

If you do your work with your full heart, then respecting your audience should come as a given, really. But just in case it wasn’t clear, and just because Ogilvy phrases the advice in an awesomely humorous way, let’s make it totally obvious:

“The consumer isn’t a moron; she is your wife.”

The client of your design, the couple waiting for their wedding photos, the audience that will view your painting, the people coming to you for advice with life, or business, or fitness, the specific audience you’ve vowed to serve, they’re not morons. Treat them with respect, and you’ll get respect back, both for yourself and for your work.

And there you have it.

How to do creative work by the great Creative himself (who’d cringe and turn over in his grave to be called a “Creative”), David Ogilvy.

How do you bring creativity to your work? Do you have any favorite quotes about doing your best work?